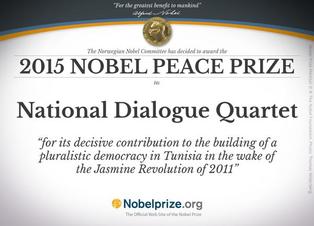 A Victory for Deliberative Democracy

​Last month’s award by the Norwegian Nobel Committee of the annual Nobel Peace Prize to the Tunisian National Dialogue Quartet is the first to be granted to organizers of a nationwide dialogue process.  Though Tunisia’s democracy is still under great stress, the richly deserved award heralded a return to bestowing the prize on those whose peace efforts directly stabilize societies on the brink of violent conflict.

Even if the Tunisian case is exceptional, its experience is well worth studying.  Tunisia has peacefully managed two political transfers of power and established a new constitution in the five years since the ouster of its authoritarian ruler, Ben Ali.   As the Nobel Committee noted, a core element of this transition was the launch of the national dialogue process, instigated when a substantial portion of the country’s population had no faith that existing governmental bodies could negotiate a successful and broadly acceptable new political order.

The conditions that led to Tunisia’s political crisis, and which continue to challenge its new government, are not unique.  Two years after the tragic self-immolation of the young Tunisian Mohamed Bouazizi ushered in the Arab Spring, escalating violence by extremists outside of the political process, social tension attributed to economic frustrations, and broad disenchantment with the new status quo led to mass protests.

At the political level, the opposition parties and the pro-government alliance led by the Islamist Ennahda Party were at loggerheads, reflecting a deep polarization among all levels of Tunisian society about many issues, including the role of Islam in the new state.  Variations of these factors have been present in most of the conflicts that rippled across the Middle East, and exist in other regions as well.

In 2013, the four organizations receiving the Nobel Prize, led by the Tunisian General Labor Union (UGTT), came together in this volatile situation to launch a National Dialogue that brought all political parties to the table. The UGTT is the country’s largest labor union, with a membership of over 400,000 in a country whose population is only 10 million.

The authority and power of the coalition it formed with the other members of “the Quartet” to which the Nobel Peace Price was awarded – the Tunisian Confederation of Industry, Trade and Handicrafts, the Tunisian Human Rights League, and the Tunisian Order of Lawyers –  arose, in part, from the fact that it presented an unusual alliance of interests among labor, business and highly-reputed civil society organizations.

Tunisians were also keenly aware of the dangers their political impasse posed to society.   The murder of two prominent politicians from the secular left provoked outrage among many.  With young Tunisians comprising the largest segment of foreign fighters from Arab countries in Syria, many feared that extremist elements could cause the revolution to spin out of control, as happened in Libya.

With these dangers looming, an intervention of some sort was imperative.  No foreign mediator would have possessed the legitimacy, authority and skills to bring the parties to the compromises reached in Tunisia’s process. What the country needed, and what they created for themselves (with well-timed assistance and support) was an organic national process of reform that led to the passing of a new constitution, the appointment of a new Prime Minister, and presidential elections.   In the words of the Nobel Committee, the Quartet’s work was nothing less than a “decisive contribution to the building of a pluralistic democracy.”

Unique as it may have been, Tunisia’s experience carries lessons for others, including the ability of civil society and business to play a complementary role in political processes and the necessity of compromise among political leaders.  Houcine Abassi, the dynamic Secretary General of the UGTT, and an experienced negotiator, played a central role as both convenor and mediator/facilitator.  Tunisia’s political leaders were just as central. Sheikh Rached Gannouchi, head of the Islamist Ennahda party (who willingly stepped down as president), and Beji Caid Essebsi, the secular leader (who later became president), ultimately led their parties to the compromises that were necessary.

Though Tunisia’s national dialogue process engaged diverse actors in what was essentially an outcome oriented political negotiation, participation was limited.   Decisions were taken by smaller groups of leaders.  Mediators and facilitators, both foreign and domestic, stepped in at key times to move the process forward.   The elite nature of some discussions did not lessen the importance of participation from individuals and institutions representing diverse constituencies, such as the Al Kawakibi Democracy Transition Center.

Perhaps the most important contribution of Tunisia’s National Dialogue, beyond its contribution at a critical moment in Tunisia’s political evolution, is the attention it draws to an increasingly important strategy for political transformation – that of inclusive and carefully structured political dialogues established when existing legislative bodies are perceived as illegitimate, or simply deadlocked and unequal to the task of political reform.