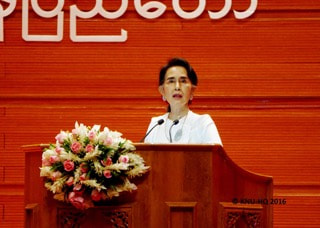 After 50 plus years of conflict between Myanmar/Burma’s central government and many of its ethnic minorities, the newly elected government led by Aung San Suu Kyi’s National League of Democracy (the “NLD”) hopes to fulfill the promise of the country’s fledgling peace process. Earlier this month, 700 representatives of the country’s ethnic parties, armed groups, the Myanmar Army, and the Burmese government concluded the second round of the Union Peace Conference. This historic conference and the ongoing political dialogue processes taking place nationally and regionally within Burma is mandated to resolve the ethnic conflict and design the structure of the new “Democratic Federal Union”. The gathering highlighted new challenges to the peace process, as Burma’s ethnic alliances continued to splinter. Though substantial progress has been made over the last three years, the NLD government must navigate a political transition that has entered a more complicated and challenging phase.

The increasing complexity of Burma’s political transition has deep historical roots, as well as more recent origins. Prior to the inauguration of National League of Democracy government, the government of former General Thein Sein had entered into a national ceasefire negotiation with the country’s ethnic armed groups, many of whom had negotiated separate, individual bi-lateral ceasefires with the government previously. Despite broad agreement on core principles by nearly all parties, ultimately only eight groups signed the “nationwide ceasefire agreement” with the government. Others opted out, some indicating that they preferred to wait for Aung San Suu Kyi’s party to assume leadership of the country before proceeding. However in the months since the NLD government took office, no new signatories have been added, and in several areas of the country occupied or controlled by the non-signatories to the ceasefire, violence has flared up, most recently resulting in the dislocation of thousands of civilians along the country’s border with Thailand.

How to move the peace process forward at both the national and state/regional level at this juncture is the central challenge. Both the nationwide ceasefire agreement and subsequent talks laid out plans for a national dialogue process, of which the recently concluded session of Union Peace Conference is one part. With the changing environment, these plans are being revised, but it is anticipated that Burma’s national dialogue process will continue for at least three to five years at both the national and sub-national levels. Its fundamental purpose is to provide a forum for a more consensus driven redrawing of a federal Burmese State. Bringing all parties to the table is critical. In the initial session of the Union Peace Conference held last January (before the NLD assumed leadership of the government), only those ethnic armed groups who were signatories to the ceasefire attended as full members. In this month’s sessions, after much government outreach and support from international governments, including China, nearly all ethnic armed groups attended in some capacity.

However the Union Peace Conference showed that the envisioned participation of Burma’s many ethnic armed groups and political parties in the current national process will not be as a unified entity. Indeed some walked out of the Union Peace Conference. Three likely blocs are emerging; each with distinct views on how to engage in the future process and varying ideas of what a new Burmese State should look like. These blocs include: the signatories to the original ceasefire (comprising some of the largest ethnic armed groups, including the Karen National Union and others); a second bloc representing those non-signatories to the original process who are nonetheless willing to engage with the NLD government, including the Kachin, Mon, and Kayah ethnic groups; and a third set of parties, representing ethnic armed groups, such as the United Wa State Army (an ethnic armed group located in territory bordering China), who are more reticent to join in the process. Balancing these interests, those of the military which still holds 25% of the seats in Parliament, and those of her own constituents in the National League of Democracy, will be a massive challenge for Aung San Suu Kyi, in her capacity as State Counselor. Much support has been given to date, but even more will be needed if this transition is to be successful. 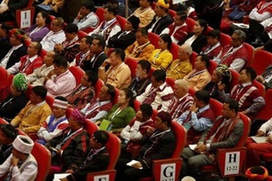