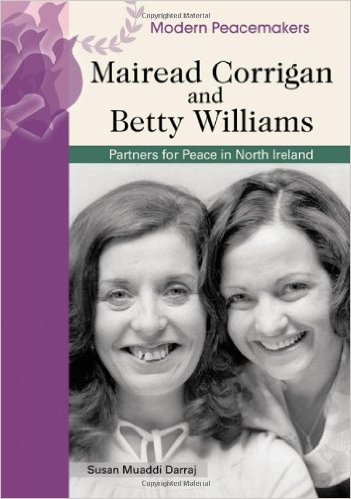 Description: Betty Williams and Mairead Corrigan were awarded the 1976 Nobel Peace Prize for their work to end the violence in Northern Ireland, a conflict dating back to the division of Ireland by the British in the 1920s. Williams and Corrigan joined forces in August 1976 in their West Belfast neighborhood, when a woman and three children out for a walk were hit by a runaway car. The car’s driver was an Irish Republican Army gunman who had been shot by British soldiers. The children were killed, their mother critically injured. The tragedy prompted horrified Belfast women – including Williams, a housewife, and Corrigan, the children’s aunt – to put a stop to the violence. The pair founded Women for Peace (later renamed Community for Peace People), and in weeks, rallied more than 30,000 people to demonstrate against violence.