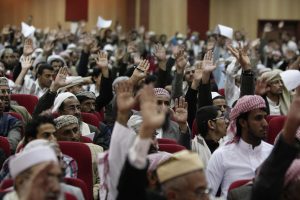 Clerics vote during a press conference held in Sana’a, Yemen, on September 26, 2013, in response to issues raised in Yemen’s national dialogue. (Hani Mohammed/AP)

On June 24, the Peace Appeal and USIP (the United States Institute of Peace) hosted two panel discussions with the authors of the Institute’s recent report, “National Dialogues in Peacebuilding and Transitions: Creativity and Adaptive Thinking.”  The conversation assessed the impacts of six national dialogues in Africa and the Middle East several years after the conclusion of these processes.  The Peace Appeal’s Co-Director, Derek Brown served as discussant for the panel surveying national dialogue processes in Senegal, Tunisia and Lebanon, while our partner, the Rev. Kenneth Mtata, General Secretary of the Zimbabwe Council of Churches, served as discussant for the panel surveying processes in the Central African Republic, Kenya and Yemen.   The video panel was recorded and may be watched at the link below.