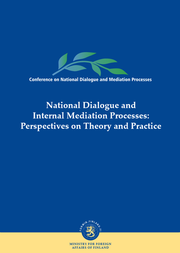 2014 and 2015 have brought greater attention to the emerging role of national dialogues as transitional mechanisms for countries in conflict to chart their political futures.   The first large scale international conference on “National Dialogues and Mediation Processes” was hosted by the Finnish Ministry of Foreign Affairs from March 30 – April 2 in 2014.   This past October, the Norwegian Nobel Committee awarded this year’s Nobel Peace Prize to the Tunisian National Dialogue Quartet.  And On November 15th of this year, the second annual conference, titled “Non-Formal Dialogue Processes and National Dialogues” will be convened again in Helsinki, with the sponsorship of the Finnish Foreign Ministry and numerous partners.

Following last year’s conference, a report entitled “National Dialogue and Internal Mediation Processes: Perspectives on Theory and Practice” was issued by the Finnish Foreign Ministry.   The publication provides an overview of dialogue processes in conflict transformation, examines the role of external actors and presents case studies from Africa, the Middle East and Southeast Asia. Also in May of this year, the UK based Conciliation Resources ACCORD series published ACCORD Issue No. 25 “Legitimacy and Peace Processes: From Coercion to Consent.”
​
​The Peace Appeal Foundation’s co-founder and Senior Technical Adviser, Hannes Siebert, authored “National Dialogue and Legitimate Change” which framed essays on dialogue processes in the Basque region, Myanmar/Burma and Yemen. With discussions and expressions of interest in launching broadly inclusive national dialogues in countries across the globe, including Sudan, Myanmar/Burma, Libya and Ukraine, the Finnish Foreign Ministry will host a second conference on the topic in 2015.