Power, Protest, and Political Change: A new report from students in the Dispute Systems Design Clinic at Harvard Law School

How can movement organizers build power to get into the negotiating room, and wield that power effectively once they’re at the table? How can they overcome vast power asymmetries? A new, freely accessible report from two students in the Dispute Systems Design Clinic at Harvard Law School engages these questions based on interviews with activists and experts around the world. 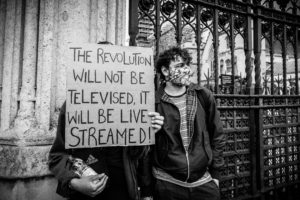 In the fall of 2020, two Harvard Law School students, Brooke Davies ‘21 and Daniel Oyolu ‘21, brought a project to us at the Dispute Systems Design Clinic. Steeped in both conflict management work and their own deep calls to social justice, Brooke and Daniel saw an opportunity to use the skills and knowledge they were developing in law school to assist activists and advocates for political change. Paired with Clinical Instructor Lisa Dicker ‘17, who has her own considerable background in global peacemaking and democratic transitions, the Power, Protest, and Political Change report is the result of months of research and interviews with activists, advocates, topical experts, and political changemakers across the globe. This open-access resource is written specifically for organizers and negotiators on the ground and is constructed according to the needs articulated in interviews.

This project was inspired by the mass protests that erupted across the United States in the summer of 2020. After the murder of George Floyd, Breonna Taylor, Ahmaud Arbery, and too many other Black Americans, protests across the country swelled by the millions into what we now know to be the largest movement in the history of this country. Despite that unprecedented demonstration of support and power, many activists in the U.S. felt that only piecemeal reforms and lip service were given in response to their demands. Sharing their frustration with the slow pace of progress, Brooke and Daniel asked themselves, “If you want to make change as an organizer, how do you build power to get into the negotiating room, and then how do you wield that power effectively once you’ve sat down at the table with your political leadership? How do you overcome a vast power asymmetry between you as one individual and your entire city, state, or national government?”

To answer those questions, Brooke and Daniel, under the supervision of the Dispute Systems Design Clinic, looked to movements both at home and abroad. They interviewed organizers across the U.S., from national initiatives like Black Lives Matter, the Sunrise Movement, and March for our Lives, to local jail support groups in Charlotte, North Carolina, and community services movements in Houston, Texas. They spoke with non-violent resistance experts at the U.S. Institute of Peace and Freedom House, ambassadors of opposition governments living in exile, high-ranking officials in transitional governments, and activists across six countries, including Yemen, Belarus, Tunisia, Syria, Sudan, and Venezuela. And they pored through theoretical works on negotiation, power, and community organizing as well as modern case studies. The “Power, Protest, and Political Change” report is the sum of these stories and expertise, and of Brooke and Daniel’s own experience and research.

Based on what organizers shared would be most useful, the findings have been divided into four independent chapters: 1) The Big Trap: When (and When Not) to Negotiate; 2) Coalitions and Allies; 3) Sustainability; 4) Communicating the Message. Along with each chapter, there are one-pagers distilling the need-to-know information from each chapter. And since they touch on organizing and negotiation—but don’t explicitly provide background on either—readers can find a page aggregating links to the best resources on both at the report website as well.

Because organizers may face only one of the challenges addressed in these reference materials at a time, or several simultaneously, the chapters are designed to be read separately. As such, if you read the report in full you may find that some of the information is repeated. However, each chapter contains important lessons for those seeking to build power and engage in negotiation, and our sincere hope is that anyone can find value in any of them.

The full set of materials is available, completely free, on our website at https://hnmcp.law.harvard.edu/power-protest-and-political-change/. We encourage you to engage with this report in the field or in the classroom, and welcome your stories as you use this powerful resource to forward your peace mission in the world.

–The Staff and Faculty of the Harvard Negotiation & Mediation Clinical Program

The report’s co-author, Brooke Davies, HLS ’21, was a teaching fellow for Peace Appeal Co-Chair’s course “Negotiating Across Worldviews” offered this past Spring at Harvard.