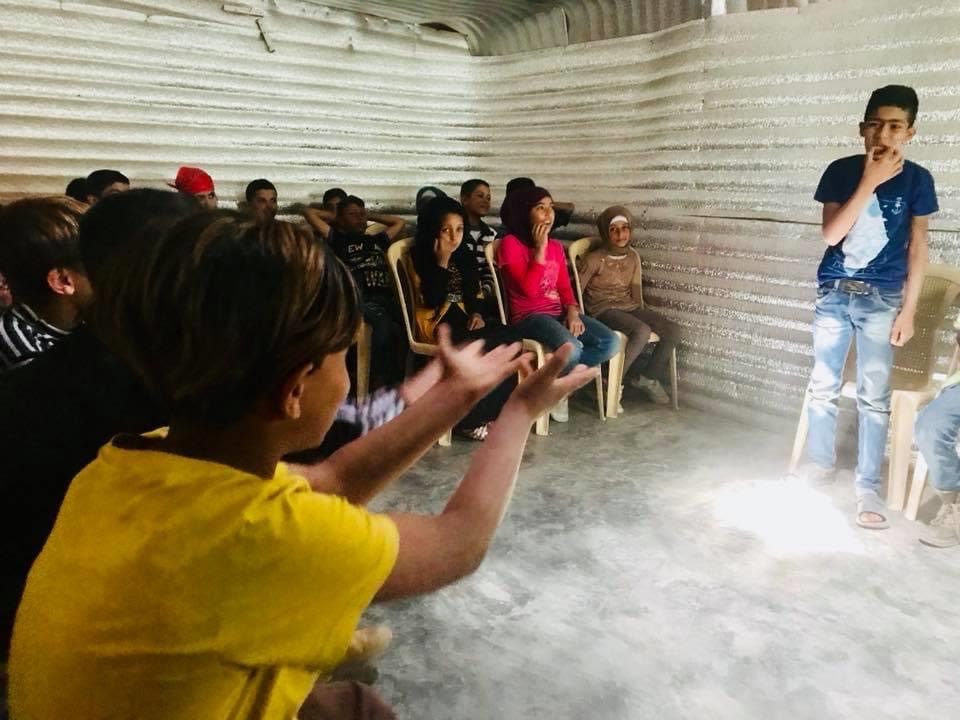 Drama exercise with children in Syria

“Anyone who has come into contact with extreme pain, suffering or death has no trouble understanding Greek drama. It’s all about bearing witness to the stories of veterans.”
Bryan Doerries, as recounted by Bessel van der Kokl, MD in “The Body Keeps the Score.”

“The theatre was created to tell people the truth about life and the social situation.” Stella Adler
This quote from Stella Adler, an actress and founder of the Stella Adler Studio of Acting in New York City, goes a long way into explaining the value of the dramatic arts, not just for entertainment, but as a tool of social change. Drama and theatre and its various forms can act as a sort of mirror of society. What you don’t know about yourself, you can sometimes see in a mirror, which will give you a greater self awareness. The dramatic arts can do that for a society, directly, through political plays or documentary, or indirectly, through parody or analogy.

Theater has also been used as a means of protest and catharsis for millennia. When a society is dissatisfied, artists exclaim it in their work. Theater exists as a voice for the people.

It can also be used to help people experience their true selves. Interactive theater—particularly with harmed children—can help the abused to release their emotions and open themselves to the world in the form of a play. The fictional circumstances can give hope to those in need of it. The use of play, embodiment, projection, role, story, metaphor, empathy, distancing, witnessing, performance, improvisation, and ritual helps to address psychological issues, allowing the patient to fully express themselves while also creating distance between themselves and problems they may face.

In the guide Drama4Peace, we have compiled a list of resources to offer an extensive overview of how the dramatic arts is used in peacebuilding. We’ve listed these resources under categories such as Theatre, Film, Television, Animation, Puppetry, Infomercials, and Drama Therapy. Under these main categories we have resources that explain the genres that exist and what they mean. We also list initiatives that are doing immensely meaningful work across the world and how to contact them.  There are examples of content created with the intent of making meaningful change, as well as the contact details of the production companies that made them. We list web resources and book resources that provide more in-depth information for those who want to learn more.

We hope this resource guide will be a place to discover the transformative power of the dramatic arts.

You can find the guide here.